Silver Falls State Park is located in Marion County, just down the road from Silverton, Oregon. It is Oregon’s largest park, boasting over 9,000 acres and more than 40 miles of hiking and horseback riding and bike trails. The popular Canyon Trail follows the banks of Silver Creek and passes ten substantial water flaws in less than ten miles.

The Canyon Trail is exceeding popular in the summer months, but can be quite beautiful in the winter as well. Here is an image of the Lower South Falls in early January, with a dusting of snow and the evening sun warming the forest above.

(Click on the image to see a larger version). 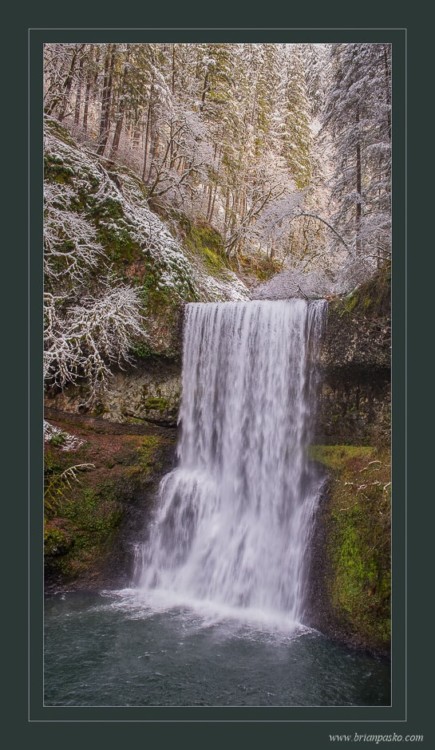 In 1888 a small logging town named “Silver Falls” was located at the very top of the South Falls. At the time the entire area was extensively logged and while the forest above has largely renewed itself there is still ample evidence of the area’s past. In the late 1920’s the area was actually rejected for consideration as a National Park because of the “proliferation of unattractive stumps after years of logging.”

Today, more than one million visitors come to the enjoy the park annually and is managed in partnership between the Oregon State Parks ad the Friends of Silver Falls State Park.